The default service definition as shipped by Open-Xchange is rather concise and easy to read. You can check by looking at the service file that is installed to either /usr/lib/systemd or /lib/systemd depending on your distribution of choice.

Drop in configs allow administrators to easily adapt and override default service unit files. So if you want to change the default limits or add additional limits have a look at our default example drop-in config which is located at /etc/systemd/system/open-xchange.service.d/limits.conf

The systemd.exec documentation shows a whole lot of options that can be used by admins to adapt the default service to their specific needs.

Note: The technical implementation of systemd differs as service definition and config aren't read every time during service start but the changes need to be reread with systemctl daemon-reload. The above is just a simplyfied version to explain the general concept.

The default service definition as shipped by Open-Xchange can be found at /etc/init.d/open-xchange and will differ slightly depending on the distro in use. 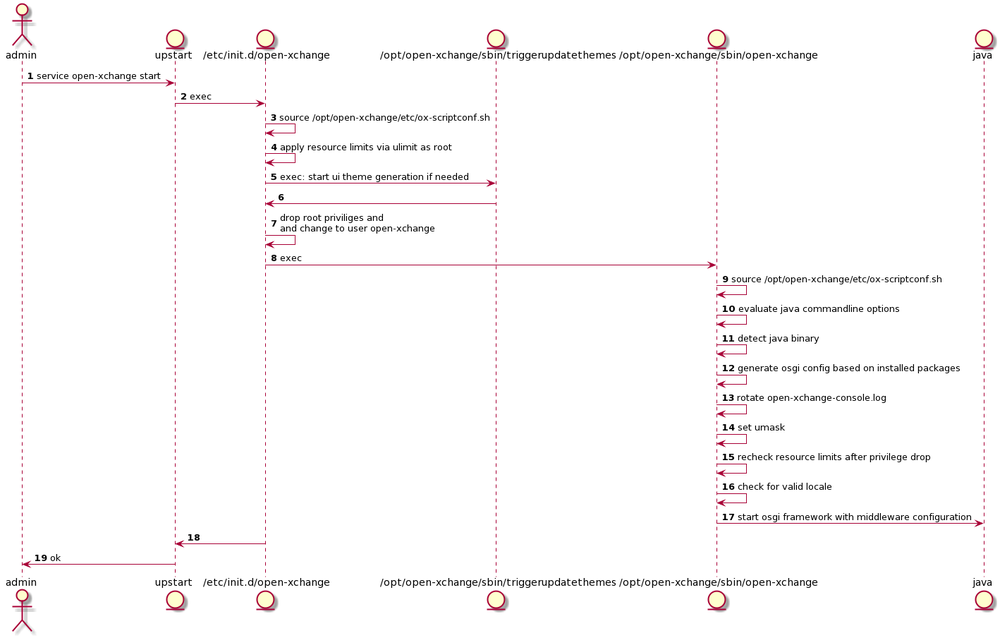 As you can see in the diagrams above one of the differences is that:

Several ways exist to restrict resources on a linux system from a global level down to user/groups or even shells and the processes started by them.

Sysctl is used to modify kernel parameters at runtime. E.g. to set the maximum number of files

More infos can be found via man sysctl

Allows to restrict resources an a global, group or user level. E.g:

Also, please note that all limit settings are set per login. They are not global, nor are they permanent; existing only for the duration of the session.

The limits per login are applied via the pam stack. See man pam and man pam_limits for more details. As those limits are bound to sessions they don't affect most daemons started by our supported init systems or init utils. Most state that they are ignored by design, see upstart, systemd and start-stop-daemon

ulimit [-HSTabcdefilmnpqrstuvx [limit]] Provides control over the resources available to the shell and to processes started by it, on systems that allow such control.

Control groups should only affect the OX middleware if you create/manage them yourself of if you are using a modern distribution that already uses systemd as init.

Citing from the kernel cgroup documentation:

cgroup is a mechanism to organize processes hierarchically and distribute system resources along the hierarchy in a controlled and configurable manner.

cgroups form a tree structure and every process in the system belongs to one and only one cgroup. All threads of a process belong to the same cgroup. On creation, all processes are put in the cgroup that the parent process belongs to at the time. A process can be migrated to another cgroup. Migration of a process doesn't affect already existing descendant processes.

Following certain structural constraints, controllers may be enabled or disabled selectively on a cgroup. All controller behaviors are hierarchical - if a controller is enabled on a cgroup, it affects all processes which belong to the cgroups consisting the inclusive sub-hierarchy of the cgroup. When a controller is enabled on a nested cgroup, it always restricts the resource distribution further. The restrictions set closer to the root in the hierarchy can not be overridden from further away.

So processes are organized into a tree structure of control groups and controllers are responsible for the distribution of resources. So what kind of controllers exist?

The "memory" controller regulates distribution of memory. ... While not completely water-tight, all major memory usages by a given cgroup are tracked so that the total memory consumption can be accounted and controlled to a reasonable extent.

The open-xchange service is simply put into the default system.slice without applying further limits.

To check all the details use

Besides control groups systemd allows you to apply other limits to the execution environment of your service. Here we can apply the limits that would normally be applied via limits.conf or ulimit. Systemd uses setrlimit for this. The options that we set by default are:

which you have already seen when we took a look at the service definition and drop-in configs. Again: The complete documentation wrt. resource limit configurations in drop-in configs can be found at systemd.exec

and check the limits applied for that process

For version up to 7.8.3 the JVM configuration options were all specified via a single property JAVA_XTRAOPTS which resulted in a rather long configuration string that was hard to read and maintain.

Beginning from version 7.8.4 the options are split up and sorted into different categories like:

which is much easier to read and maintain. Furthermore we added a useful JAVA_OPTS_DEBUG configuration parameter that comes preconfigured but unused/commented so that customers can quickly enable the most commonly used debugging options in case they have to provide detailed system information to Open-Xchange.

During the upgrade 7.8.3-revX -> 7.8.4-revY existing JAVA_XTRAOPTS will automatically be split up and migrated to the new categories approach. A backup of the file (ox-scriptconf.sh.timestamp) will be created and admins are urged to check for proper migration before deleting the backup file like it's already done with *.dpkg-dist or *.rpmnew files on Debian or RHEL/SLES distributions.

The format to specify a system locale is: language[_territory][.codeset][@modifier].

The default file.encoding detection is done at JVM startup based upon LC_CTYPE which makes sense as it's documented as:

Furthermore this influences the defaultCharset selection of the JVM.

Although we try to specify valid unicode encodings for every IO operation the Open-Xchange middleware does, some parts of the JVM don't allow to specify the encoding to use and simply falls back to the detected default encoding. That's why admins have to make sure to provide a proper unicode environment for the middleware service during every service start or use documented workarounds provided by Open-Xchange (e.g. com.openexchange.passwordchange.script.base64: Encoded strings as Base64 to circumvent character encoding issues on improperly configured distributions).

See the documentation of your linux distribution on how to configure a proper unicode locale.

Query which file encoding was detected by the JVM during startup 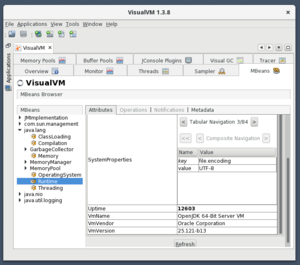 Querying the JVM via visualvm

The file encoding that was detected by the JVM during startup can be queried via JMX. You can use graphical management tools like visualvm, query our Jolokia JMX bridge via http or just use the commandline like

Locale passing from client to server via SSH

The following setting of sshd allows clients to specify which locale to use on the server and might lead to some confusion or unexpected behaviour when checking the system locale or even to the usage of broken locales during middleware startup if your client sends misconfigured or missing locale configuration to the server.

But after specifying that i want a new login shell the default locale configured for that user/system will be used instead!

Assuming you haven't reconfigured the locale of your root user

Early warnings before the start of the JVM and related logging libraries like logback and logstash forwarding are redirected to /var/log/open-xchange/open-xchange-console.log.

If the open-xchange startup script isn't able to set the proper limits on CentOS 6 due to e.g. hard limits being enforced via pam_limits you'll see the following warning in the console log during startup

The support for the mentioned mechanism of resource control differ depending on the distribution and the init system in use.

The mentioned limits can be configured via /opt/open-xchange/etc/ox-scriptconf.sh. The limits are applied via ulimit in the service's init script. The open-xchange service is finally started via start-stop-daemon which doesn't doesn't consider /etc/security/limits.*

The mentioned limits can be configured via /opt/open-xchange/etc/ox-scriptconf.sh. The limits are applied via ulimit in the service's init script. Furthermore as the open-xchange service is finally started via su ... open-xchange on this distro a user session is opened via su/pam and the default CentOS pam config reads the /etc/security/limits.* configuration by loading the pam stack like:

If NPROC isn't configured for the open-xchange-server it's restricted to 1024 globally by default to prevent accidental fork bombs, see /etc/security/limits.d/90-nproc.conf which can result in severe problems modern multithreaded applications.